A Monkey Ate My Breakfast

A Monkey Ate My breakfast - Motorhome Adventures in Morocco

by Julie and Jason Buckley 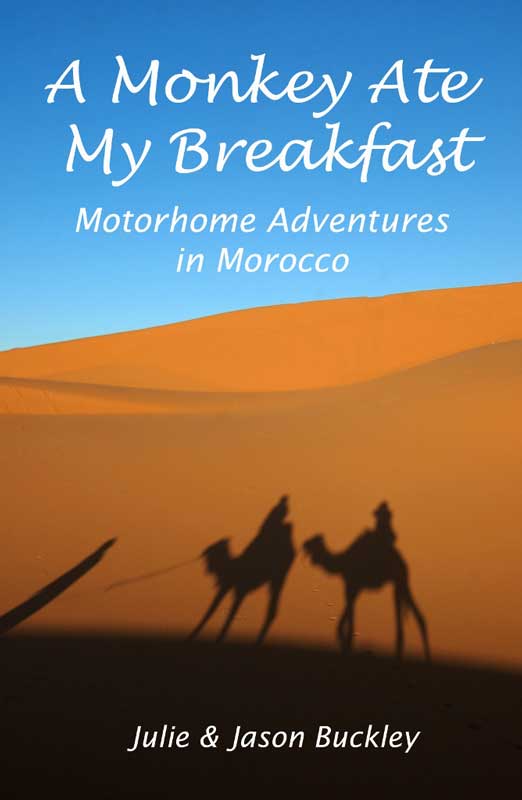 This is a travel book written by Julie and Jason Buckley and it details their initiation (limited to one month by their insurance) into the world that is Morocco. They progress from timid newbies, seemingly nervous and apprehensive of every possible scenario that could unfold once in the country, to confident and experienced Moroccan motorhome travellers taking pretty well everything in their stride.

They travelled as independents, as opposed to being in a guided group, so they learned their many lessons as they went along their way. The skill of bartering was mastered, saying 'No' to the frequent outstretched hands became easier, bureaucratic paperwork became more familiar and dealing with the often chaotic driving became second nature.

As keen motorhome bloggers the trip gave them a chance to meet up with other similar 'online' friends together with a couple that they had met earlier in their travels. Sharing experiences and knowledge and providing some good company at their campsite refuges.

The book is very descriptive of the journey, the country, the people and the overall environment so makes excellent reading for anyone who is considering a tour of Morocco themselves and also those that have already been, if only to compare notes and maybe stir up some memories of the place.

It's a good read!

A Monkey Ate My Breakfast is available in Kindle format and in paperback via Amazon.

Link to Kindle version in the Club Motorhome Store

Link to paperback version in the Club Motorhome Store